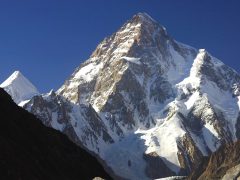 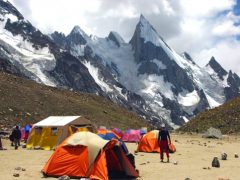 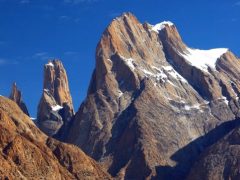 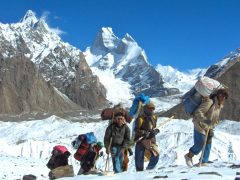 K2 Base Camp Trek is Pakistan’s leading full board destination management company catering under one roof the entire travel needs of valued travelers, since its establishment K2 base camp trek has organized hundreds of trekking trips to most delightful destination of Karakoram via Baltoro Glacier to Concordia, K2 Base Camp and Gondogoro La/Pass.

Trekking to K2 Base Camp is a 22-days journey which includes 15 days of trekking, it is suitable for experienced and adaptable trekkers with a strong sense of adventure. K2 Base Camp is considered to be one of the world’s great treks with breathtaking views of four 8,000m peaks. K2 Base Camp Trek is been described as the “Throne Room of the Mountain Gods” for its unique panoramic view of 7,000m mountains and views of 8 thousand meter peaks

This Trek is famous for two routes, one is coming back via same route from K2 Base camp and the second is passing the Gondogoro La (pass 5,585 m) going down toward Hushey valley.  Gondogoro La connects Baltoro region with Hushey Valley, home to the exquisite Laila Peak (6,096m) and some small villages like Hushey and Kanday.

Returning from K2 base camp via same route it is called “K2 Base Camp Trek” if extended the trek back route via Gondogoro pass is known as “K2 Base Camp & Gondogoro La Trek” This is demanding circular trek; the pass is very steep and crossing it requires the use of fixed ropes to ascend and descend. This is a more adventurous trekking.

On this dedicated website we offer 3rd trek which is Snow Lake and Biafo Hispar La trek. Biafo Glacier (60 km. long) and Hispar Glacier (61 km. long) meet at the 5151 m. Hispar Pass to form one of the longest glacial systems outside the polar regions. This highway of ice connects two ancient mountain kingdoms; Hunza in the west with Baltistan in the east.

At the base of Hispar Pass on its eastern flank rests Snow Lake, a basin of ice (16 km. wide) surrounded by granite pinnacles yet to be climbed. Glaciologists have conducted various experiments on the lake and have found the ice to be approximately 1.6 km. deep. Some go as far as to say that Snow Lake represents the last of the original ice cap in the earth’s temperate zones.

In this venture, we assure you a quality time. K2 Base Camp Trek is one of the parent trekking companies in Pakistan. These three treks are one of the finest treks you can find on planet earth. Please do not hesitate to contact us.